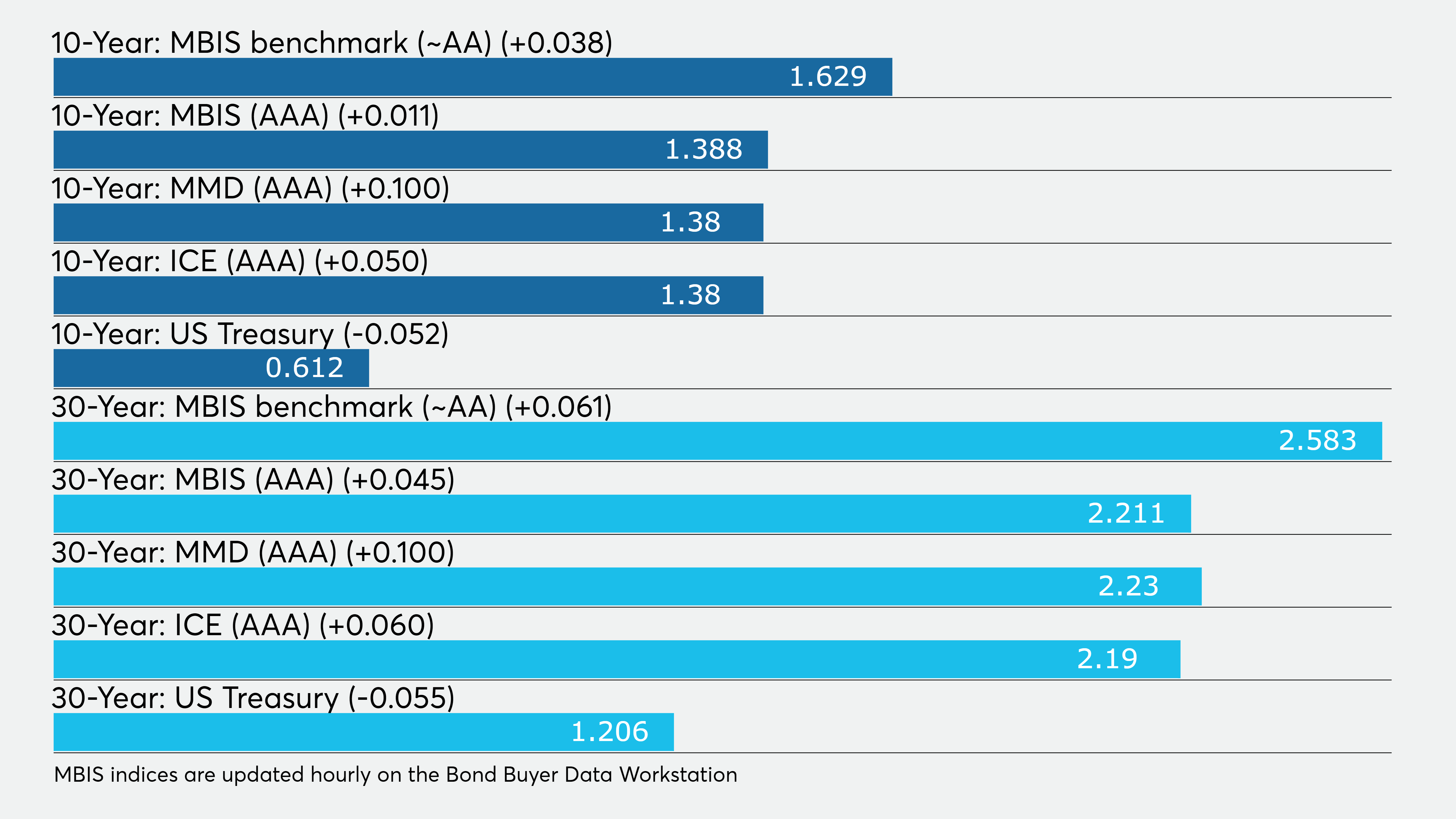 The market isn’t facing 50-basis-point swings, but its footing is still off as participants grapple with the long-term effects of the pandemic.

“As the municipal market continues to heal, issuers see the historically low rates as a borrowing opportunity,” Nuveen analysts said in a report. “We expect new issuance to continue increasing, and municipal investors are adjusting accordingly.”

Meanwhile, the New York Metropolitan Transportation Authority pulled its $672 million transportation revenue green bonds from the calendar at least until May 4.

“We seem to be entering the third wave of supply-driven cuts since most of us started working remote,” said one southern trader. “With increased supply, whether it is fund selling or a larger primary issuance, the market seems to lose its footing quickly.”

He noted that with Tuesday’s cuts, the muni market will have cheapened by around 30 basis points since last Monday.

“However, this slower pace of these cuts is certainly healthier for the market than the intraday 50 cuts we have recently experienced,” he said. “For price discovery this week, there have been several AAA names that have sold competitively,” most notably Tuesday’s Harford, Maryland GO deal.

The deals sold to different underwriters, but both were purchased at a healthy spread to the current AAA, according to the trader.

“The market has also seen negotiated PSF deals with strong underlying ratings price at much wider spreads,” he said. “In addition to credit concerns for the pandemic, participants are also weighing how the collapse of oil prices will effect various credits in oil-dependent states. As usual, the market tends to react to these concerns by moving to higher yields.”

Goldman Sachs priced the Curators of the University of Missouri’s (Aa1/AA+/ / ) $400 million of taxable bonds.

On Refinitiv Municipal Market Data’s AAA benchmark scale, the yield on both the 10-year muni and 30-year were 10 basis points higher to 1.38% and 2.23%, respectively.

Stocks were mixed as Tresuries were lower.

Selectivity and swelling volume
Municipal yields have room to rise moderately on the heels of last week’s rising yields on longer paper, the arrival of $7 billion in new issuance, and the second consecutive week of positive fund flows, according to Nuveen’s Bill Martin, head of global fixed income, and John Miller, head of municipals, in an April 27 weekly commentary.

“As the municipal market continues to heal, issuers see the historically low rates as a borrowing opportunity,” the analysts said. “We expect new issuance to continue increasing, and municipal investors are adjusting accordingly.”

They pointed to this week’s calendar, which is again bustling with more than $7 billion in primary issuance, including $2.2 billion in taxable paper.

While they said that is still true, the anticipation of heightened supply allows investors to be more selective — which could prove to be an advantage or disadvantage.

“As a result, issuers will likely be forced to price deals more cheaply,” they said.

However, some investors may decide to remain on the sidelines in anticipation of more attractive prices ahead.

Despite being priced relatively cheaply, Anne Arundel, Maryland’s $222 million general obligation issue — rated Aa1 by Moody’s Investors Service and triple-A by Standard & Poor’s — met with a “tepid” reception, according to the analysts.

The $74 million deal which priced April 22 included a 2049 final maturity priced to yield 2.18% — 16 basis points cheaper at the time of pricing than the comparable triple-A GO benchmark scale tracked by Refinitive/Municipal Market Data.

“This difficulty was not a credit issue, but rather it reflects investors anticipating the growing new-issue calendar, which will come cheaper,” Martin and Miller said.

Meanwhile, in the high-yield sector, the analysts said they feel investors are being compensated for credit deterioration before an eventual recovery, even though outflows have returned.

For instance, they said that high-yield municipal bond outflows totaled $318 million last week, largely reversing the $292 million in inflows that arrived in the previous week.

“Credit spreads currently average plus 360 basis points and we are seeing dislocated municipal-to-Treasury ratios,” they added.

They noted that Illinois bonds, for example, are trading at levels commensurate with bonds rated low double-B to high single B, which indicates the market is already pricing in major downgrades to one of the highest-profile issuers.

“We believe defaults should be limited to projects that were already experiencing stresses or underwritten with lapses in security features,” they added.

Christine Albano contributed to this report.