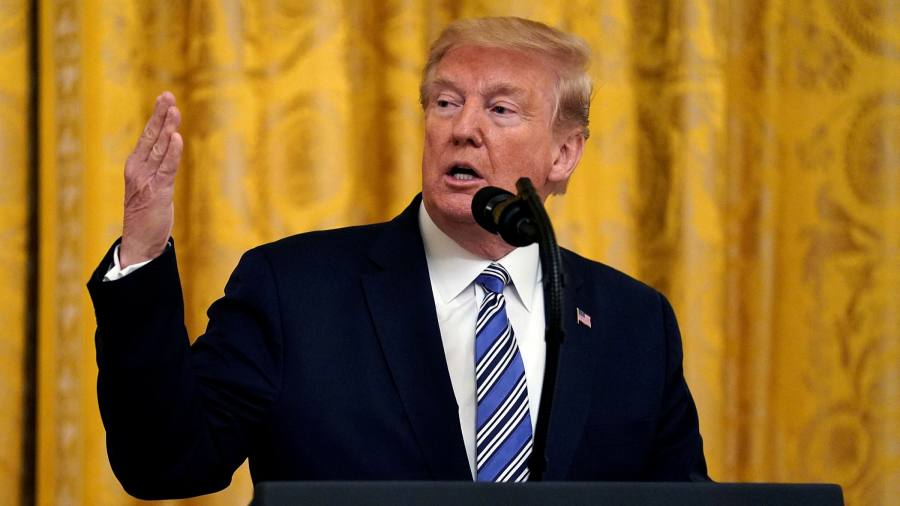 President Donald Trump plans to order meat-processing plants to remain open, as concerns mount about the food supply chain after the closure of a number of big facilities because of coronavirus outbreaks.

Speaking to reporters on Tuesday afternoon, Mr Trump said his team was drafting an order that he would sign “over the next hour or so”.

A senior US official said Mr Trump would use the Defense Production Act to force the plants to stay open. He said the government would help companies secure additional protective gear for workers.

The president suggested that his executive order would help shield companies from any legal liability that could arise from remaining open while they deal with coronavirus outbreaks in their plants.

“We have had some difficulty where they’re having a liability that’s really unfair to them,” he said. “I should be signing that over the next hour or so, taking the liability, which frees up the entire system.”

Over the past month, Mr Trump has invoked the Defense Production Act — a Korean war-era law that permits the government to order companies to take action for national security reasons — several times, including to force General Motors to manufacture medical ventilators. He has also threatened other industries with the measure.

The move to use the law for meatpacking plants comes after Tyson Foods, the largest US meat company, warned that the nation’s food supply chain was “breaking” as the number of coronavirus cases at plants rose. Tyson has been forced to close three slaughterhouses over the past week because of the virus and the need for testing.

Iowa’s Republican governor and two senators had also urged Mike Pence, the US vice-president who heads the coronavirus task force, to invoke the DPA to ensure that Iowa could continue to process pork.

In a letter to Mr Pence, Governor Kim Reynolds and Senators Chuck Grassley and Joni Ernst said Iowan farmers could not send their pigs to market and would have to kill the animals if the processing plants were closed.

The United Food and Commercial Workers Union (UFCW), which represents 250,000 meatpacking and food processing workers, said 20 people in the sector have died and 6,500 have been infected or exposed to the virus. It wants Congress to protect workers with more readily available protective equipment and widespread testing.

Kim Cordova, head of a local UFCW chapter in Greeley, Colorado, said any effort to protect companies would reduce the incentive to create a safe work environment. In Greeley, JBS, a meat processing company, just reopened a beef plant where more than 100 staff tested positive for Covid-19.

“If Trump waives liability for any type of lawsuit, the companies have absolutely no incentive to make a safe workplace,” said Ms Cordova. She pointed out that there was “not a long line of people waiting to be packing house workers” at the moment given the situation.

Several big pork and beef processing plants across the US have been forced to temporarily or indefinitely close following outbreaks of the coronavirus. The UFCW estimated that 22 plants have closed at least temporarily. The closures have raised fears over the ability of farmers to continue getting their products to supermarkets.

Cindy Axne, a House Democrat who has a Tyson Foods meat plant in her Iowa congressional district, said ensuring that workers were protected was critical to ensuring the integrity of US food supply chains.

“Any requirement, from an employer or from the president himself, for plant employees to keep coming to work because they are deemed essential needs to be accompanied by ironclad answers on what protections will be in place to reflect their importance,” Ms Axne said.

Tyson Foods said it could not comment because it had not seen the executive order. But it said its “top priority remains the safety our team members and plant communities”.

While the order could alleviate food shortages, unions said they were concerned about the impact on workers at the plants.

“We only wish that this administration cared as much about the lives of working people as it does about meat, pork and poultry products,” said Stuart Appelbaum, president of the Retail, Wholesale and Department Store Union.

On Tuesday, the number of coronavirus cases in the US topped 1m and the death toll hit almost 58,000, according to data compiled by Johns Hopkins University.

As states debate when to reopen their economies, some companies and industry associations, including the National Association of Manufacturers, have called on the federal government to help shield them from lawsuits.

The issue of liability has also become a sticking point in preliminary discussions between Democrats and Republicans over what should be in the next stimulus package.