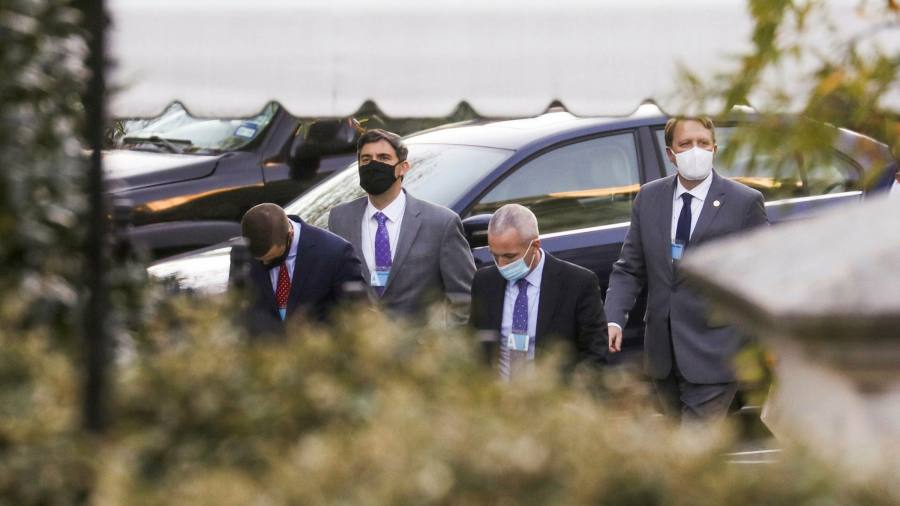 Donald Trump’s efforts to overturn the US presidential election result suffered significant setbacks on Friday after Georgia officially certified Joe Biden’s win and top Republican lawmakers in Michigan dismissed the idea they would throw the state to the president.

The developments were the latest blows to Mr Trump’s unprecedented and long-shot effort to retain power by tossing out or disregarding millions of votes that carried Mr Biden to victory by a clear margin in several battleground states and the Electoral College.

Georgia’s secretary of state and its governor, Brad Raffensperger and Brian Kemp, both Republicans, on Friday certified the results of its election, officially making Mr Biden the first Democrat to win the state since the early 1990s.

The certification came after an audit and hand recount of all 5m ballots in a state that Mr Biden carried by just over 12,000 votes. Mr Trump could still request a formal recount, which would be conducted by machine.

The US president attacked Mr Raffensperger and Mr Kemp on Twitter, repeating claims without evidence of “hundreds of thousands of illegal ballots” in the state. “Why are they so fast to certify a meaningless tally?”

Meanwhile, the top two Republicans in Michigan’s state legislature met Mr Trump at the White House but emerged to pour cold water on the notion that they would try to intervene and undo the more than 150,000 vote margin by which Mr Biden won the state.

“We have not yet been made aware of any information that would change the outcome of the election in Michigan and as legislative leaders, we will follow the law and follow the normal process regarding Michigan’s electors,” said Mike Shirkey and Lee Chatfield, the Michigan Senate leader and House speaker respectively.

“The candidates who win the most votes win elections and Michigan’s electoral votes,” their statement added.

The meeting at the White House came after a Trump campaign adviser had talked up the idea that the battleground state’s lawmakers could unilaterally declare Mr Trump the winner if the votes were not certified.

Earlier in the week, a bipartisan elections board in Michigan’s Wayne County, which includes Detroit, deadlocked on certifying its results after two Republican members refused to give their approval.

The Republicans ultimately voted to certify, but then sought to take back those votes, a move that came after Mr Trump had personally called them, US media reported.

Jenna Ellis, a Trump campaign legal adviser, had applauded the initial failure to certify as a “huge win” for Mr Trump, tweeting on Tuesday: “If the state board follows suit, the Republican state legislator will select the electors.”

Michigan’s state board of canvassers, which has two Republicans and two Democrats, is set to meet on Monday to consider whether to certify its election results. The Trump campaign this week withdrew a lawsuit that sought to halt the certification.