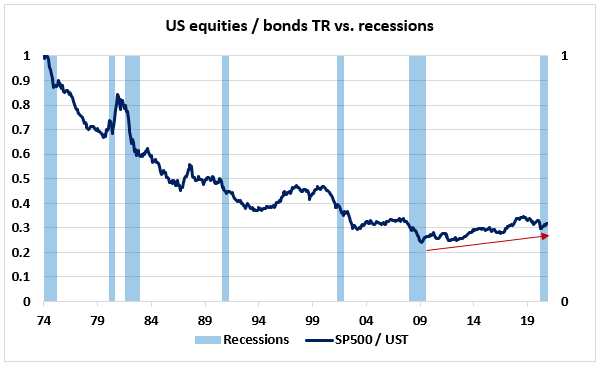 With interest rates trading close to or at zero percent in most of the developed economies, we have been questioning if bonds still remain a good hedge against equity drawdowns in the medium term. Historically, we know that three major assets that perform well when uncertainty and price volatility rise have been US Treasuries, gold, and cash (Japanese yen has been the winner currency). However, we are less confident that Treasuries will remain the favored assets, and therefore, it is an important time for investors to challenge the conventional 60/40 equity bond portfolio allocation in the future.

US equities versus bonds performance (vol-adjust)

If we look back at the past 50 years, we find an interesting observation when we compute the relative performance of US equities to bonds. Using monthly times series of total returns of the Bloomberg Barclays US Aggregate Bond Index and the S&P 500 TR index, we calculate monthly returns of each asset class and then adjust our US Treasuries exposure using the 1-year realized volatility of equities. We also rebalance our portfolio every single month, so that the volatility of each asset remains constant. Figure 1 shows that US equities have lost 68% of its value relative to bonds since January 1974, with a high of 76% reached in March 2009 (when S&P 500 found its low at 666).

Moreover, in the past two economic downturns, equities have lost nearly 20% of their values (relative to Treasuries) between 1999 and 2002 and 10% of their values between 2007 and 2009, respectively. However, in the past cycle, the S&P 500 TR index has outperformed Treasuries with the ratio rising from 24% in March 2009 to 34% in October 2018 (when US growth peaked, and uncertainty started to surge). The ZIRP (zero interest rate policy), in addition to the large asset purchase schemes run by the Fed, has completely compressed the term premium across the whole term structure but has also reduced the expected gains from bonds in case we see another equity drawdown.

One surprising observation during the February/March sell-off was the spectacular simultaneous sell-off in both equities (SPY) and bonds (TLT). Figure 2 (left frame) shows the performance of a traditional 60/40 equity bond portfolio allocation since January 2003 and how strongly and consistently this portfolio has performed in the past cycle, up from 100 in March 2009 to 334 in November 2020. However, figure 2 (right frame) shows a significant drawdown in March with the 60/40 portfolio down 18% during the COVID-19 panic. The other ‘all-weather’ long-only asset allocation known as Risk Parity was down 28% from peak to trough, questioning the robustness of these portfolios for the future.

Not only long-duration bonds (TLT) may not offer an interesting hedge against sudden unexpected shocks in the equity markets in the medium term, but we do think that long-term interest rates will continue to rise in the US in the short term. We think that the new rounds of stimulus to support restrictive economies in addition to the vaccine news will limit the downside risk in equities and should levitate the S&P 500 to new all-time highs. On the other hand, we think that the 10Y yield will continue to rise towards the 1.00% – 1.25% range. Figure 3 (right frame) also shows that the market-implied measure of inflation expectations – the 5Y5Y inflation swap – is also pricing in a higher 10Y yield at the moment.

In addition, we previously saw that the rise in uncertainty over inflation expectations and the economic outlook should lift up the term premium (figure 4, left frame), and therefore, levitate the 10Y, which should steepen the yield curve. Figure 4 (right frame) shows that, since it inverted in August 2019, the 2Y10Y yield curve has gradually been steepening and should reach 1 percent in the coming months based on our projections.

Therefore, rising long-term yields and yield curve steepening should continue to weigh on long duration bonds; as the US 10Y yield has been gradually rising in the past 3 months, TLT has fallen from 172 to 160, which represents the 23.6% Fibo retracement of the 111.7 – 173.2 range. Momentum indicators such as moving average crossovers have been starting to show bearish signals (with the 50D SMA recently falling below the 200D SMA). We do think that there is still room for further bearish retracement towards the 150 support line as interest rates continue to rise slowly in the near term.

In the long run, we strongly suggest investors reduce their allocation in TLT and hold assets such as gold (GLD) or even cryptocurrencies (BTC) in their portfolio as a new hedge against central banks’ future intervention. 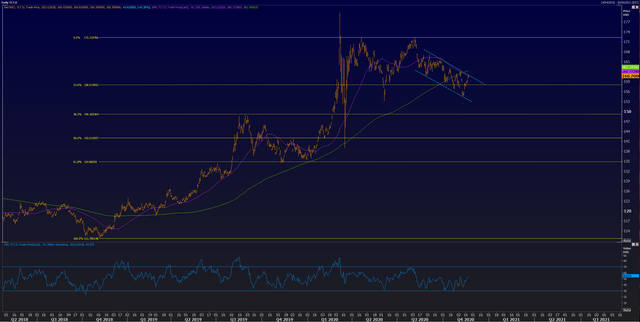 Disclosure: I am/we are long BTC, GBPUSD. I wrote this article myself, and it expresses my own opinions. I am not receiving compensation for it (other than from Seeking Alpha). I have no business relationship with any company whose stock is mentioned in this article.

European nations plan cautious easing of lockdowns for Christmas
Knock Home Swap: A Timely Solution For Home Sellers Who Are Also Home Buyers To Bid Competitively
15 Tips For Determining The Right Time To Buy Commercial Real Estate
The Best Home And Decor Holiday Gifts of 2020
What Financial Advisors Are Grateful for in 2020