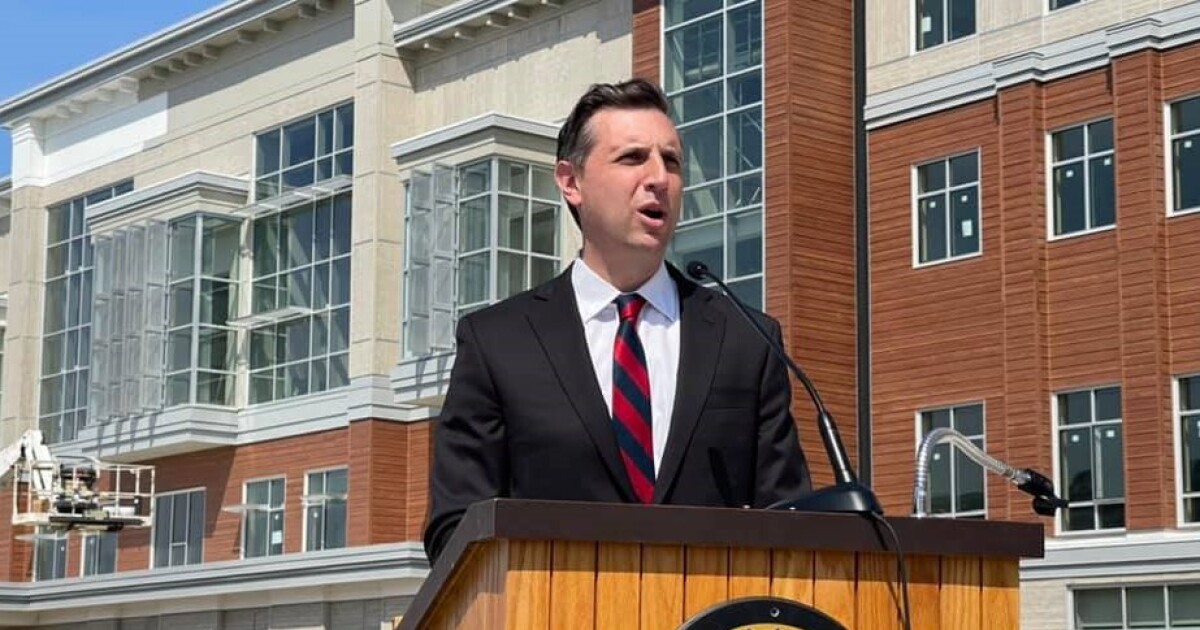 The old building, which opened in 1951, was part of a cookie-cutter system that a school district in Texas adapted from East Providence. That Texas building was torn down 15 years ago.

“That just shows that this is long overdue,” Magaziner said above a mix of background noise that included beeping trucks, motorcycles and high wind.

East Providence is one of four test cases that anchored Magaziner’s progress report on school construction in the Ocean State. Since the program began three years ago, Rhode Island has allocated $1.3 billion to repair and replace 163 school buildings, according to Magaziner’s first progress report.

The April 28 press conference marked one of Magaziner’s last public appearances before his office revealed that he is working at home under quarantine because he may have come in contact with an individual who tested positive for the coronavirus.

“The treasurer has not tested positive and does not have any symptoms, but will quarantine in accordance with Rhode Island Department of Health guidelines, and he will continue to maintain a full work schedule from his home until further notice,” his office said in a statement.

His work goes on and he said the early data the state is collecting on school building progress is “extremely encouraging.” “In addition to embarking on major new construction and renovation projects, school districts are meeting stricter standards for maintenance and upkeep of existing facilities,” Magaziner said.

Results vary by district, Magaziner said, with the ability of local communities to form a “consensus vision” for school facilities the biggest variable.

A report by the Government Accountability Office last year said about 36,000 K through 12 facilities need HVAC — heating, ventilation and air conditioning — system updates. Among the districts GAO surveyed, 41% needed these updates in at least half their schools.

“If not addressed, such problems can lead to indoor air quality problems and mold, and in some cases caused schools to adjust schedules temporarily,” the report said.

Former Rhode Island Gov. Gina Raimondo, now U.S. commerce secretary, convened a 19-member task force in September 2017 after an independent study that the state’s Department of Education commissioned — the so-called Schoolhouses Report — identified more than $2.2 billion of deficiencies in the state’s 306 public schools, more than $600 million of which are immediate “warm, safe, and dry” needs.

Magaziner co-chaired the task force with Ken Wagner, commissioner of elementary and secondary education at the time.

Educational needs resonate with Magaziner, who taught third and fourth grade public-school classes before becoming a venture capitalist and then state treasurer, a position he has held since January 2015.

“I taught in largely old buildings that were falling apart,” he said. “They had lead and asbestos. The HVAC systems never seemed to work. I how the conditions of the buildings affect learning.”

Separately, Magaziner is pushing for a state bill requring school systems to teach financial literacy. It just moved out of the House Committee on Education. The Senate has already passed a companion bill.

“Studies have shown [it] leads to better financial outcomes in adulthood,” Magaziner said. Rhode Island, he added, is one of only 14 states that does not guarantee personal finance education to all students.

East Providence, with a 47,500 population and the state’s fifth-largest city, will go to market later this month with a $130 million bond general obligation bond issue through the Rhode Island Health and Educational Building Corp.

It features a heavy state-aid component and a portion of the project was financed through the Rhode Island Infrastructure Bank earlier this year.

Voters in 2018 approved a bond for the high school.

“It’s going to be the most technologically state of the art new high school in Rhode Island,” Mayor Bob DaSilva said.

Magaziner called East Providence “a great example of what can be done when a community steps up to take advantage of this program.”

In January 2020, the city issued its first financing for the project, a $78 million bond anticipation note priced by BofA Securities and scheduled to mature next month. The city locked in a 1.5% interest rate.

The new building will be four stories, occupy 304,000 square feet and house up to 1,600 students. The previous one, according to DaSilva, had but one science lab and was not energy efficient. Each room, he said, had only one electrical outlet, which hindered technology programs.

The district projected it would have to spend at least $100 million just to bring the school up to code, not including additional repairs to the Career and Technical Center building or building layout changes to meet today’s educational standards.

Construction went on during the pandemic. “We didn’t miss a beat during COVID,” said Kathryn Crowley, the city’s schools superintendent.

Pawtucket plans to repair and modernize all 17 schools, including the expansion of buildings and realignment of grades. Groundbreaking for the Henry J. Winters Elementary School took place April 14.

“This has been years in the making,” Mayor Don Grebien said.

In Smithfield, the town will receive a 35% state reimbursement for school construction costs. With the town’s goals to consolidate schools and increase energy efficiency, it was eligible for an additional 15% in bonuses, bringing the total reimbursement to 50%. Smithfield also received an additional $16.7 million in funding.

“Among high schools in the state, it was in the direst condition,” Magaziner’s report said.

Under the task force’s new incentives, Newport’s school building proposal is eligible for 52.5% state reimbursement for their recently approved school construction projects, up from the city’s standard 35%.

Newport will be responsible for $50.5 million of construction costs, Rhode Island contributing $55.83 million to the projects. The city hopes to begin construction on the high school during the fourth quarter of the year, with the new school opening for students in September 2025.