Appian soars after winning $2.04 billion verdict against Pegasystems By Reuters 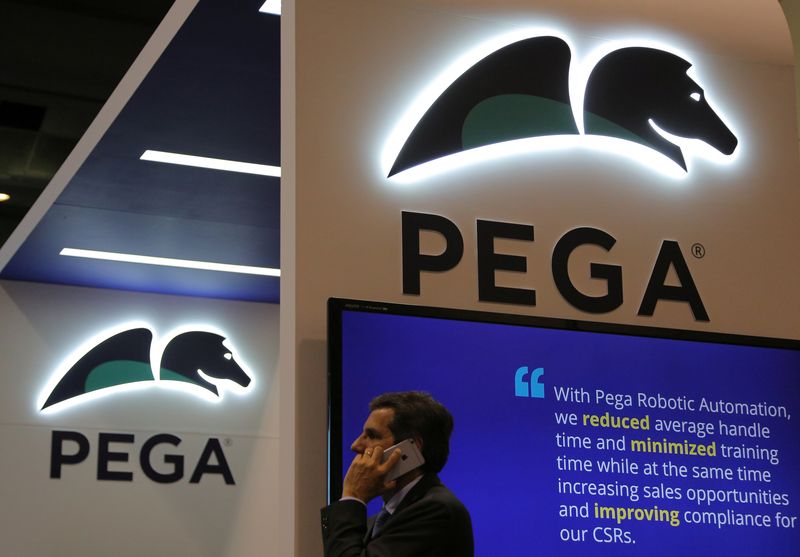 © Reuters. FILE PHOTO: A man talks on the phone under a Pega logo at the Pegasystems booth at the SIBOS banking and financial conference in Toronto, Ontario, Canada October 19, 2017. Picture taken October 19, 2017. REUTERS/Chris Helgren

The damages award issued on Monday by the Fairfax County Circuit Court jury followed a seven-week trial, and may be the largest in Virginia’s history, Appian (NASDAQ:) said.

Shares of Appian rose as much as 38% on Tuesday, while Pegasystems fell as much as 45%.

Appian, based in McLean, Virginia, alleged in its May 2020 lawsuit that Pegasystems retained an employee of a government contractor from 2012 to 2014 to access its software, helping it to improve its own products and better train its sales force.

It said Pegasystems, based in Cambridge, Massachusetts, referred internally to the contractor as a “spy” and to its scheme as “Project Crush,” with some employees using bogus credentials to fool Appian into providing access.

Appian said the jury found the misappropriation willful and malicious, which could enable it to recoup legal fees.

Pegasystems spokeswoman Lisa Pintchman said the verdict resulted from “significant error” and was not supported by the facts or law, and that the company “will certainly appeal what we believe is an unjust result.”

The damages award included $1 for a violation of the Virginia Computer Crimes Act, Pegasystems said.

Appian general counsel Christopher Winters said in a statement: “The award of substantial damages to Appian is entirely appropriate given the nature and extent of what Pegasystems did.”

Earned Income Tax Credit (EITC): What Is It & Who Qualifies?

Earned Income Tax Credit (EITC): What Is It & Who Qualifies?