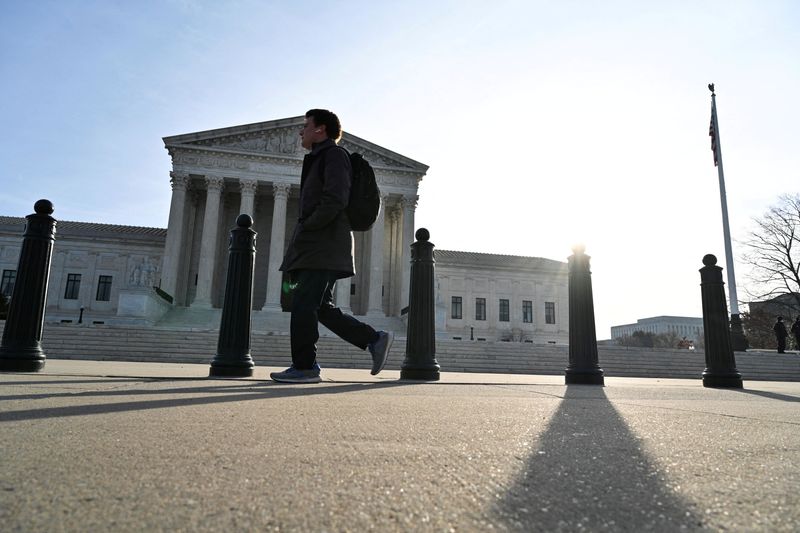 WASHINGTON (Reuters) -President Joe Biden’s administration on Tuesday asked the U.S. Supreme Court not to hear Bayer (OTC:)’s bid to dismiss claims by customers who contend that its Roundup weedkiller causes cancer, as the company seeks to avoid potentially billions of dollars in damages.

Solicitor General Elizabeth Prelogar, who represents the administration before the high court, said in a court filing that Bayer’s appeal should be rejected.

Bayer shares on Wednesday plunged 6.3%, a loss of about 3.7 billion euros ($3.9 billion) in market value, to their lowest in seven weeks at 0735 GMT as traders dismissed any likelihood of the company’s case being heard.

The stock is still up more than 20% this year on a rebound in demand from farmers.

Bayer last August petitioned the justices to reverse a lower court’s decision that upheld $25 million in damages awarded to California resident Edwin Hardeman, a Roundup user who blamed his cancer on the German pharmaceutical and chemical giant’s glyphosate-based weedkillers.

The Supreme Court in December asked Biden’s administration to provide its views. The justices generally give deference to the solicitor general’s conclusions.

Bayer has argued that the cancer claims over Roundup and its active ingredient glyphosate go against sound science and product clearance from the U.S. Environmental Protection Agency. The EPA has upheld guidance that glyphosate is not carcinogenic and not a risk to public health when used as indicated on the label.

The lawsuits against Bayer have said the company should have warned customers of the alleged cancer risk.

“EPA’s approval of labeling that does not warn about particular chronic risks does not by itself preempt a state-law requirement to provide such warnings,” Prelogar wrote.

The Supreme Court’s decision on whether to take up the matter is being closely watched as Bayer maneuvers to limit its legal liability in thousands of cases.

A company statement said Bayer believes it has “strong legal arguments” to support the Supreme Court taking up the case.

Roundup-related lawsuits have dogged Bayer since it acquired the brand as part of its $63 billion purchase of agricultural seeds and pesticides maker Monsanto (NYSE:) in 2018.

Despite the recent share price recovery, all of Bayer only has a market value of about what it paid for Monsanto, burdened by the litigation.

Bayer struck a settlement deal in principle with plaintiffs two years ago but failed to win court approval for a separate agreement on how to handle future cases.

In July, Bayer took an additional litigation provision of $4.5 billion in case of an unfavorable ruling by the Supreme Court or in case the justices declined to consider its petition.

The provision came on top of $11.6 billion it previously set aside for settlements and litigation over the matter.

Bayer plans to replace glyphosate in weedkillers for the U.S. residential market for non-professional gardeners with other active ingredients.

It has said it will continue to sell the herbicide to farmers, who rely on it heavily and whose role in the litigation has been described as negligible by Bayer.

Bayer has put on hold the settlement of about 30,000 cases, out of 125,000 cases overall, as it awaits decisions by the Supreme Court.

Bayer had asked the Supreme Court to review the verdict in Hardeman’s case, which was upheld https://www.reuters.com/business/healthcare-pharmaceuticals/us-appeals-court-upholds-verdict-that-bayers-roundup-caused-cancer-2021-05-14 by the San Francisco-based 9th U.S. Circuit Court of Appeals in May.

Hardeman had regularly used Roundup for 26 years at his home in northern California before being diagnosed with a form of non-Hodgkin’s lymphoma.

Should Some Clients Self-Insure for Long-Term Care?

Should Some Clients Self-Insure for Long-Term Care?