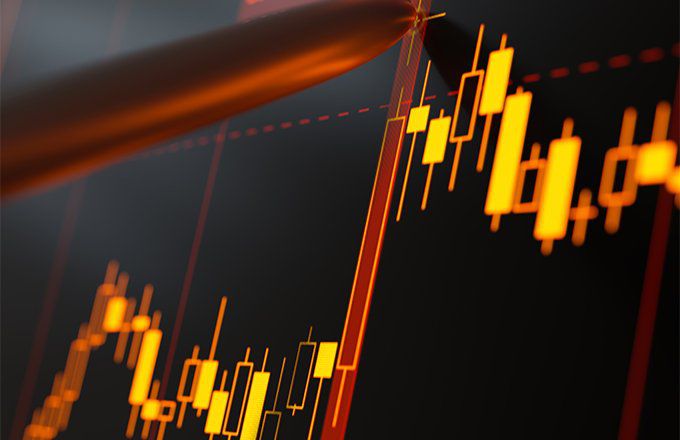 Candlesticks and oscillators can be used independently, or in combination, to highlight potential short-term trading opportunities. Swing traders specialize in using technical analysis to take advantage of short-term price moves. Successfully trading these swings requires the ability to accurately determine both trend direction and trend strength. This can be done through the use of chart patterns, oscillators, volume analysis, fractals, and a variety of other methods.

This article will focus on using oscillators and candlestick patterns to identify swing trades.

Swing traders can look for short-term reversals in the price to capture forthcoming price moves in that direction. The first step is to find the right conditions for a reversal, which can be done with either candlesticks or oscillators.

Candlestick reversals are characterized by indecision candles or candles that show a strong shift in sentiment (from buying to selling or selling to buying), while oscillators highlight potential reversals via divergence.

Divergence is when the price is moving in the opposite direction of a momentum oscillator. Think of it in physics terms: if you throw a ball up in the air, it loses momentum before it reverses direction. This is also how reversals can occur in the stock market. Momentum slows before stock prices reverse. Divergence may show when the momentum is slowing and a potential reversal is forthcoming. Not all price reversals are forecast by divergence, but many are.

Divergence is a good starting point for a trade. Divergence doesn’t always need to be present, but if it is present, the candlestick patterns (discussed next) are likely to be more powerful and likely to result in better trades.

The following chart shows divergence. The price was moving higher but the oscillator—the relative strength index (RSI), in this case—was moving lower. The divergence showed weakness in the rise, which was also visible by looking at the price action as the price could barely make new highers before falling again. Ultimately the price ended up falling significantly.

The next step is to define an exact (or as close as possible) point of reversal. This task is best accomplished using specific candlestick patterns. Although there are over 50 different candlestick patterns, here we will focus on two of the more common ones.

A bullish engulfing pattern is the opposite. The price is falling and then there is a large up candle that envelops the prior down candle, showing buyers have entered the market aggressively.

The spinning top pattern is another common candlestick reversal pattern. It is a small body with long tails. It shows indecision because there is volatility throughout the period but by the end of the period, the price is near where it started. While spinning tops may occur on their own and signal a trend change, two or three will often occur in tandem. The price will then make a significant move in one direction or the other, and close in that direction. That is the direction to trade-in.

The following chart shows examples of these formations.

Here are a couple more examples that combine divergence as well as the candlestick patterns.

The following chart shows a strong divergence. The price was edging above former highs while the RSI was collapsing. Just after putting in a new high the price formed a strong bearish engulfing pattern and the price proceeded lower.

Here is an example where indecision candles help to signal a short-term price reversal. There was also a divergence present at the time of the trade. The price was moving higher within a longer-term uptrend, but then there were three days in a row with long upper tails and little change between the open and the close.

These slight variations of the spinning top often have different names, but the interpretation is the same if all the other conditions of the trade align. There was then a strong close to the downside, accompanied by divergence on the RSI: the price had just made a new high (before falling) yet the RSI was well below its prior high.

What Is Swing Trading?

Swing trading is a technical strategy to profit from reversals in a market trend, occurring over periods ranging from several days to weeks. The goal is to enter a trend and then exit as it reverses, sometimes taking the opposite position in hopes it will reverse once more.

Technical tools like momentum indicators and oscillators can help point to a potential market reversal (or confirm one that has occurred) by signaling that market sentiment may be changing or a trend may be running out of steam. Such indicators look for declining trading volume and price patterns that indicate a pivot may be imminent.

What Other Indicators Can Swing Traders Use?

Candlesticks and oscillators provide traders with a quick and easy way to identify swing trades. While the methods can be used independently, using them together is often more powerful.

Not all reversals are forecast by divergence or these candlestick patterns, they are just a few of the many ways that a reversal may manifest. When taking any trade, be sure to manage risk with a stop loss. If going short, a stop loss can be placed above the most recent swing high, or if going long it can be placed below the most recent swing low.

Exploring BIP119 And Changes Made To Bitcoin

Exploring BIP119 And Changes Made To Bitcoin