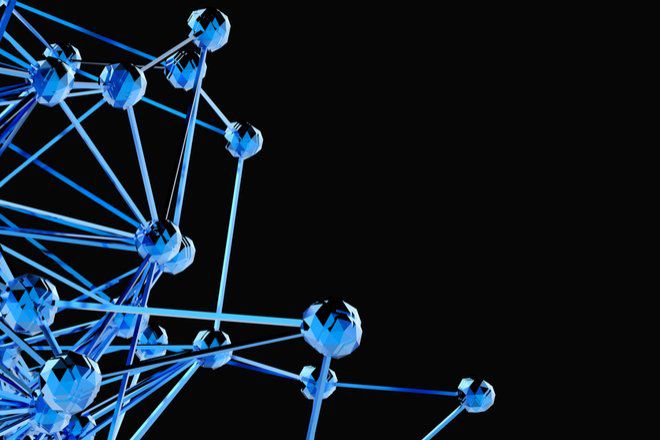 Bitcoin is more than a cryptocurrency used as a payment or for investors to hold and hope for value increases. There is an entire ecosystem at work behind a cryptocurrency. There are many of these ecosystems working on the internet today, but because Bitcoin was the first, it’s essential to understand what makes it work and how.

Learn what’s going on behind the scenes in the Bitcoin network to help you further your understanding of this digital phenomenon and how it influences the world’s finances.

The Bitcoin blockchain is a database of transactions secured by encryption and validated by peers. Here’s how it works. The blockchain is not stored in one place; it is distributed across multiple computers and systems within the network. These systems are called nodes. Every node has a copy of the blockchain, and every copy is updated whenever there is a validated change to the blockchain.

Queued transactions are entered into the block, the block is closed, and the blockchain creates the hash. Each block contains information from the previous blocks, so the blockchain cannot be altered because each block is “chained” to the one before it. Blocks are validated and opened by a process called mining.

Mining is the process of validating transactions and creating a new block on the blockchain. Mining is conducted by software applications that run on computers or machines designed specifically for mining called Application Specific Integrated Circuits.

The hash is the focus of the mining programs and machines. They are working to generate a number that matches the block hash. The programs randomly generate a hash and try to match the block hash, using the nonce as the variable number, increasing it every time a guess is made. The number of hashes a miner can produce per second is its hash rate.

Mining programs across the network generate hashes. The miners compete to see which one will solve the hash first—the one that does receives the bitcoin reward, a new block is created, and the process repeats for the next group of transactions.

Bitcoin’s protocol will require a longer string of zeroes depending on the number of miners, adjusting the difficulty to hit a rate of one new block every 10 minutes. The difficulty—or the average number of tries it takes to verify the hash—has been increasing since Bitcoin was introduced, reaching tens of trillions of average attempts to solve the hash. As this suggests, it has become significantly more difficult to mine Bitcoin since the cryptocurrency launched.

Mining is intensive, requiring big, expensive rigs and a lot of electricity to power them. And it’s competitive. There’s no telling what nonce will work, so the goal is to plow through them as quickly as possible with as many machines working on the hash as possible to get the reward. This is why mining farms and mining pools were created.

The last bitcoin is expected to be mined somewhere around 2140. All 21 million bitcoins will have been mined at that time, and miners will depend solely on fees to maintain the network.

A common question from those new to Bitcoin is, “I’ve purchased a bitcoin, now where is it?” The easiest way to understand this is to think about the Bitcoin blockchain as a community bank that stores everyone’s funds. You view your balance using a wallet, which is like your bank’s mobile application. If you’re like many people today, you don’t use cash very often and never see the money in your checking account. Instead, you use credit and debit cards, which act as tools to access and use your money. You access your bitcoin using a wallet and keys.

A bitcoin at its core is data with ownership assigned. Data ownership is transferred when transactions are made, much like using your debit card to transfer money to an online retailer. You use your wallet, the mobile application, to send or receive bitcoin.

When bitcoin is assigned to an owner via a transaction on the blockchain, that owner receives a number, their private key. Your wallet has a public address—called your public key—that is used when someone sends you a bitcoin, similar to the way they enter your email address in an email.

A wallet is a software application used to view your balance and send or receive bitcoin. The wallet interfaces with the blockchain network and locates your bitcoin for you. The blockchain is a ledger with portions of bitcoin stored on it. Because bitcoin is data inputs and outputs, they are scattered all over the blockchain in pieces because they have been used in previous transactions. Your wallet application finds them all, totals the amount, and displays it.

There are two types of wallets, custodial and noncustodial. A custodial wallet is one where a trusted entity, like an exchange, holds your keys for you. For example, when you sign up for a Coinbase exchange account, you can elect to have them store your keys for you as custodians.

Noncustodial wallets are wallets where the user takes responsibility for securing the keys, such as in your wallet application on your mobile phone. Storing keys in an application connected to the internet is referred to as hot storage. However, hot storage is the vulnerability most often exploited.

You should always use a reputable wallet provider, like from a registered cryptocurrency exchange. Read reviews and research wallets to ensure you’re choosing one that is reliable.

To remedy this, the cryptocurrency community has developed methods for storing your keys offline. Most commonly, you’ll hear about hot storage, cold storage, and deep cold storage. Hot storage is any wallet that stores your keys and has an active connection to the internet—this is the most vulnerable method. An example of a hot wallet is the wallet application on your mobile device.

Cold storage is any method that is not connected to the internet. This could be a removable USB drive or a piece of paper with your keys written on it (this is called a paper wallet). Deep cold storage is any cold storage method that is secured somewhere that requires additional steps to access the keys beyond removing the USB drive from your desk drawer and plugging it in. Examples might be a personal safe or storage deposit box—anything that takes extra effort to retrieve your keys.

A bitcoin transaction happens when you send or receive a bitcoin. To send a coin, you enter the receiver’s address in your wallet application, enter your private key, and agree to the transaction fee. Then, press whichever button corresponds to ‘send.’ The receiver must wait for the transaction to be verified by the mining network, which can take up to several hours because transactions wait in a mining queue called the mempool.

The mempool is where transactions waiting to be verified go. The network, on average, confirms a block of transactions about every ten minutes, but not all new transactions go into the new block that is created. This is because blocks only hold a certain amount of information, and each transaction comes with a mining fee.

Transactions must meet the minimum transaction fee threshold to be processed, and the transactions with the highest fees are processed first. This is why you may hear about the problem of rising fees—Bitcoin is so popular that demand for transactions has increased, allowing (or requiring) miners to charge higher fees.

Transaction fees were established to create an incentive for people to become network nodes and miners. Bitcoin mining is also expensive, so fees help to offset the cost of equipment and electricity used.

Once the fee is met, the transaction is transferred to a block, where it is processed. Once transaction information within the block is validated by miners, the block is closed, and all receivers collect their bitcoin. Both wallets display their appropriate balances, and the next transactions are processed.

There are many parts that make up the Bitcoin blockchain and network, but it is not necessary to understand it all to use this new currency technology. You only need to know that you use a wallet to send, receive, and store your bitcoin keys; you also should use a cold storage method for security because non-custodial wallets can be hacked.

Custodial wallets can also be hacked, but many who offer this service take measures to reduce the chances that hackers can get into the storage systems. Most are turning to enterprise-level cold storage techniques businesses use to store essential data for extended timeframes.

For good reason, many people are concerned about Bitcoin’s level of security, especially since it involves exchanging money for encrypted data ownership. However, it’s important to note that the Bitcoin blockchain has never been hacked because of the community consensus mechanisms used. Wallets are the weak spot, so if you’re looking to get involved in Bitcoin, it’s essential to understand how to utilize cold storage methods and keep your keys out of your hot wallet.

How Does One Make Money From Bitcoin?

Bitcoin wasn’t designed as a means for making money but rather as a payment method accessible by everyone. However, some people use it as an investment. This is very risky and should only be done after talking to a professional financial advisor about your financial circumstances.

Can Bitcoin be Converted to Cash?

You can use some exchanges to convert your bitcoin to cash. There are also some ATMs—called Bitcoin Kiosks—that will allow you to withdraw cash in exchange for bitcoin.

Is Bitcoin Worth Investing In?

Bitcoin’s price is very volatile, which means it rises and falls very often, sometimes in large dollar increments. You can generate significant returns investing in Bitcoin, but you can also quickly lose substantial money. It’s best to speak to a professional investment or financial advisor about your financial circumstances before investing in Bitcoin.

Investing in cryptocurrencies and other Initial Coin Offerings (“ICOs”) is highly risky and speculative, and this article is not a recommendation by Investopedia or the writer to invest in cryptocurrencies or other ICOs. Since each individual’s situation is unique, a qualified professional should always be consulted before making any financial decisions. Investopedia makes no representations or warranties as to the accuracy or timeliness of the information contained herein.

Banks Back on the Road to Recovery

Grayscale Met With SEC On Approval Of Spot-Bitcoin ETF

Grayscale Met With SEC On Approval Of Spot-Bitcoin ETF