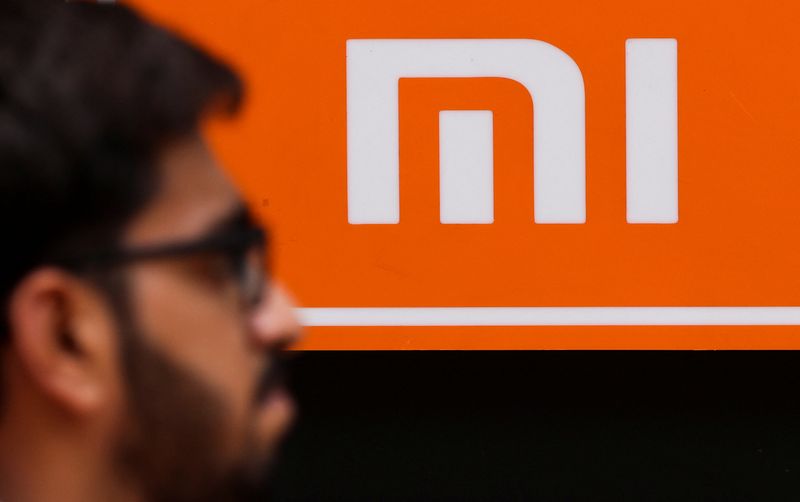 © Reuters. A man walks past a logo of Xiaomi, a Chinese manufacturer of consumer electronics, outside a shop in Mumbai, India, May 11, 2022. REUTERS/Francis Mascarenhas

By Aditya Kalra and Munsif Vengattil

NEW DELHI (Reuters) – Indian tax officials froze $478 million worth of deposits lying in local bank accounts of China’s Xiaomi (OTC:) Corp in February as part of an investigation into alleged tax evasion, according to two sources and a court filing reviewed by Reuters.

The fund freeze by tax authorities, being reported for the first time by Reuters, comes on top of another legal tussle Chinese smartphone giant Xiaomi faces where it has challenged – successfully so far – a block on $725 million of its funds by another Indian enforcement agency for alleged illegal foreign remittances.

Xiaomi did not respond to a request for comment.

The spokesperson for the income tax department declined to comment.

Two sources with direct knowledge said the amount blocked by tax inspectors was a fallout of the December raids conducted at Xiaomi India offices for alleged income tax evasion.

That investigation, said one of the sources, concerns allegations the Chinese company purchased smartphones from its contract manufactures at inflated costs in India, allowing it to record a smaller profit by selling them to customers and evading corporate income taxes.

It is not clear if the company appealed the decision.

The freeze by the income tax department was cited by Xiaomi in a May 4 court filing in southern Karnataka state, where it is challenging the other bank account seizure done by the federal crime fighting agency, the Enforcement Directorate, in the royalty case.

The Directorate says Xiaomi illegally made foreign remittances to certain entities “in the guise of” royalties even though it did not avail any service from them, an allegation the company denies. The Indian court has put on hold the Directorate’s decision until May 23 on Xiaomi’s appeal.

Referencing the two probes, Xiaomi states in its court document it “has cooperated in each of these investigations and provided all requisite information.”

India’s Income Tax Department “put under lien” $478 million of its deposits by an order dated Feb. 18, 2022, Xiaomi stated in its filing.

Chinese companies have struggled to do business in India since 2020, when a border clash occurred between the two nations. India has cited security concerns in banning more than 300 Chinese apps since then, including popular ones, such as TikTok, and tightened norms for Chinese companies investing in India.

Xiaomi recently hit the headlines with accusations that its executives faced intimidation from Indian Directorate’s officials, drawing public rebuttals from the agency and words of support from the Chinese government.

Xiaomi saw its share of the Indian smartphone market quadruple from just 6% in 2016 to 24% last year, making it the market leader, according to Counterpoint Research.