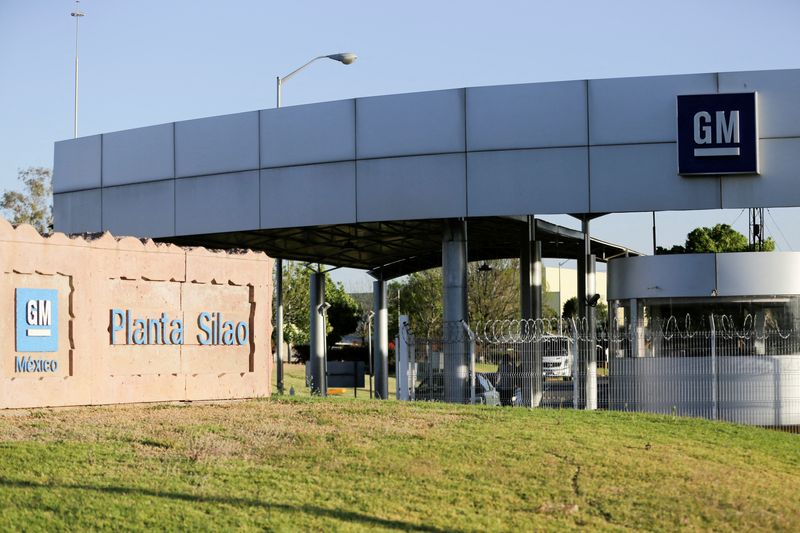 © Reuters. FILE PHOTO: A view of the main entrance of the General Motors’ pickup truck plant as workers vote to elect a new union under a labor reform that underpins a new trade deal with Canada and the United States, in Silao, Mexico February 1, 2022. REUTERS/Sergi

MEXICO CITY (Reuters) -U.S. automaker General Motors (NYSE:) has agreed a 8.5% wage hike with a new, independent union at its pick-up truck plant in the central Mexican city of Silao, labor representatives said on Thursday, one of the highest recent raises in the country’s auto industry.

The deal with union SINTTIA also marks the first major raise since the start of a new trade deal, the United States-Mexico-Canada Agreement (USMCA), which aims to reduce the vast wage gap between U.S. and Mexican workers.

“It’s a victory, a step in the right direction,” said Gaspar Rivera Salgado, director of the Center for Mexican Studies at the University of California Los Angeles. It remains to be seen if such raises can be easily duplicated, he added.

Following a vote closely watched by U.S. officials, SINTTIA this year became the first independent union in the GM Silao plant’s history, in an early test of USMCA labor rules.

SINTTIA said alongside wages, the deal comprises bigger bonuses, a 14% increase in grocery vouchers and a mandatory day off on Christmas Eve.

The new contract also stipulates GM and the union will form working groups to negotiate work schedules; a protocol for dealing with sexual harassment cases; and a program to push back against inflation in the coming years.

The contract is good for two years, although salaries will be up for review in a year, said Alejandra Morales, SINTTIA’s secretary general.

Morales said she hoped workers at other plants would see news of the raise as a sign of what independent unions can accomplish in a country where many companies sign so-called “protection contracts” without worker knowledge.

“Before, there were deals just between companies and unions. Today it’s possible for us workers to have real negotiations,” said Morales, a GM Silao employee for nearly 12 years.

GM declined to comment on details of the contract ahead of a workers’ vote to approve the deal expected later this month.

SINTTIA had pushed for raises above inflation, which accelerated to 7.68% in April in Mexico. It initially proposed an increase of 19.2%, which GM countered with an offer of 3.5%.

The pay deal appears to outstrip others recently struck by independent unions in Mexico’s auto sector.

What is Day Trading Liquidity and Why It Matters

What Happens to My CDs When I Die?