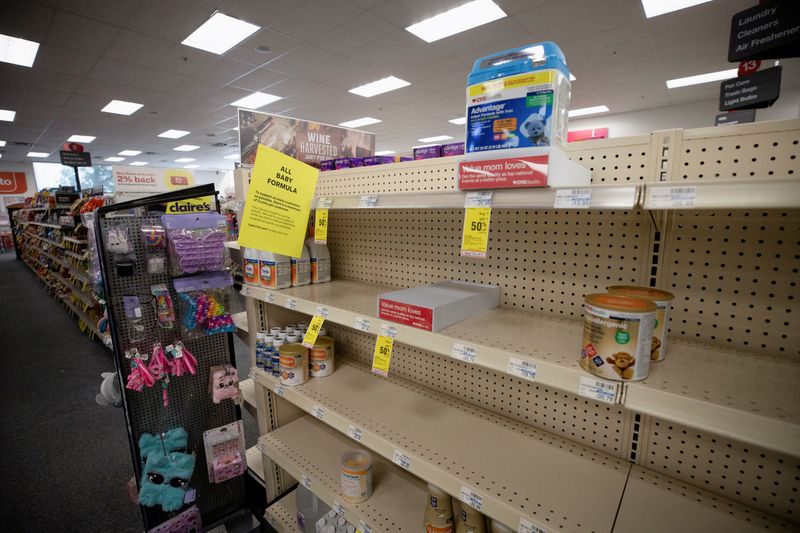 WASHINGTON (Reuters) -U.S. President Joe Biden met on Thursday with executives from infant formula manufacturers and retailers including Target , Walmart (NYSE:) and Nestle’s Gerber, pressing them to do everything possible to get families access amid a nationwide shortage.

The White House also outlined measures the administration is taking to address the issue and said it was considering invoking the Defense Production Act.

The U.S. Food & Drug Administration (FDA) will announce new steps in the coming days regarding importing certain infant formula products from abroad, the White House said, and Biden has asked the Federal Trade Commission (FTC) to probe reports of predatory conduct such as price gouging.

Formula shortages because of a factory being taken offline have been compounded by supply chain snags and historic inflation, leaving about 40% of baby formula products out of stock nationwide, according to data firm Datasembly.

Families depend on formula. Less than half of babies born in the United States were exclusively breastfed through their first three months, the Centers for Disease Control and Prevention 2020 Breastfeeding Report Card showed.

During his meeting with the executives, Biden discussed efforts to increase production and urged companies to “do more to help families purchase infant formula,” White House spokesperson Jen Psaki said.

“What we are seeing, which is an enormous problem, is hoarding,” Psaki said. “That is also something we’re focused on.”

Biden later said on Twitter (NYSE:), “I’m announcing new actions and working with the private sector to get infant formula into stores as quickly as possible without compromising safety.”

Abbott, the biggest U.S. supplier of milk formula, said tests showed one bacteria strain found in the facility was not linked to any known infant illnesses, although it was updating its cleaning and related protocols.

House Speaker Nancy Pelosi told reporters lawmakers want to ensure it does not happen again, “but right now the baby’s crying, the baby’s hungry and we need to address the situation right now.”

On Thursday, House Republicans criticized the Biden administration, saying a plan should have been in place to address the shortages sooner.

Abbott said it could restart production at Sturgis within two weeks of FDA approval, adding it is prioritizing production at its Columbus, Ohio, facility and air-shipping formula from its Ireland plant.

The company announced the recall on Feb. 17.

On Feb. 28, the FDA warned of Cronobacter sakazakii and Salmonella Newport infections in babies fed with formula produced at the Michigan plant. The FDA finished inspecting that facility on March 18, and the company responded on April 8, Abbott said.

Is Australia ready for its own digital type of currency?

Is Australia ready for its own digital type of currency?

Is the Stock Market in a Bubble?